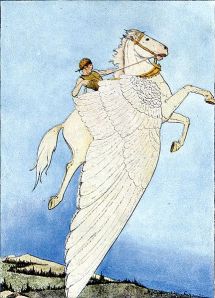 In Greek mythology the magical winged horse, Pegasus, can only be tamed with a golden bridle. Bellerophon needs Pegasus to slay the Chimera and he spends months trying to catch him but he is unsuccessful. Finally he prays to the gods for help and he is instructed to sleep in the Temple of Athena. While he sleeps he dreams Athena visits him and tells him how to find Pegasus at the well where he drinks and gives him golden bridle that will allow him to ride Pegasus. When Bellerophon wakes up there is a golden bridle by his side and he knows the dream was real. He finds the well Athena described and captures Pegasus when he kneels down to drink by pushing the bridle over his head. Once the bridle is on Pegasus is beholden to Bellerophon’s will.

I like this myth because I think it plainly describes how much stock humans put in equipment. If we just have the right bridle, the right bit, the right caveson then our horse will be beholden to our will and our training issues will be solved. But the truth is equipment is only as good as the training that accompanies it. A bridle is a powerful tool, but horses learn how to respond to a bridle. You have to teach them. Golden bridles aren’t gifted by the gods, they are built by good training.

Since I will be riding Aesop in the spring again, I want to teach him how to work in a french riding caveson. This is work that can and should be taught from the ground. Here’s a video of Aesop’s first lesson learning how to be “ridden from the ground.”:

It’s important to teach your horse rein cues before you get on so that you have a reliable language at your disposal. Horses have a blind spot directly behind them so they can’t see us once we are on their backs. We literally disappear from view. For many horses, that means they lose all of the visual training language they have built with their human once riding begins. Stressful, to say the least! I don’t want Aesop to be struggling to understand me once I am on his back. I want him to be confident about what is being asked of him and enjoying our training time. So I’m taking the time to teach him rein and tactile cues from the ground. Here’s our second session in the arena:

We are doing the same exercise you see in the first video. Can you stand still while I lift the reins? Click/Reward. Can you soften to me when I slide down the rein? Click/Reward. Can you walk off when you feel pressure on your side? Click/Reward. He’s overbending a bit when I slide down the rein but that is something that I can progressively shape to be smaller and smaller. He’s trying and that’s good. He is a bit confused about pressure on his side being a cue to walk off, especially because I have always walked off up by his head. I’m asking him to move off first AND from a new cue. That’s hard. But the video shows his best and lightest attempt. For his second session he’s doing a wonderful job.

Even if there was a magic golden bridle I could get by worshipping the right gods, I wouldn’t be interested. When Bellerophon removes the golden bridle, Pegasus flies away and Bellerophon spends the rest of his days searching for the horse. To me it’s a cautionary tale: Don’t let your equipment take the place of good communication with your horse. Take the time to teach your horse what he needs to know so you are bound by relationship and a common language.