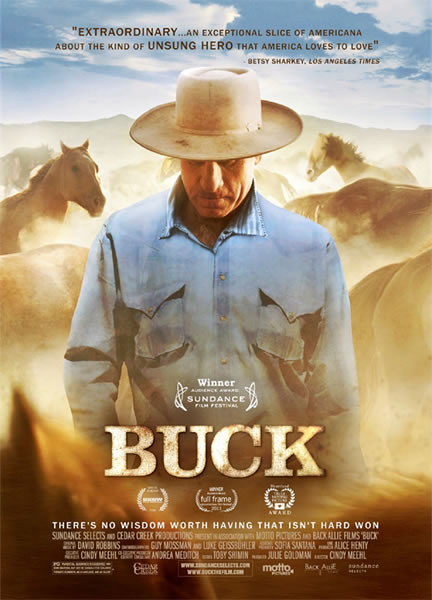 Last night I went to see “Buck”, the documentary about Buck Brannaman, a natural horsemanship trainer who travels the United States teaching people how to ‘gentle’ their horses, start their colts and generally understand more ‘about why horses do what they do.’

Where do I begin?

I know that what used to pass for horse training  was nothing more than non-contingent punishment and flooding until the horse gave up resisting out of pure exhaustion. If you were watching a video of that it would look like this:

Let’s be honest: that’s not even training. It’s just humans jumping on, holding on with our opposable thumbs and long bi-pedal legs and sheer tenacity until the equine decided it took way too much energy to try to get rid of these tall, unpredictable animals who wanted to cling to their backs. There is no regard for the animal, just a display of power for the human and some machismo to be gained. It did achieve behavior change, but at great stress and cost to both the horse and the human, sometimes even their lives. For the ones that made it through the training alive and uninjured, their first association with someone on their back was poisoned as an emotionally and physically grueling, if not scarring event.

The “training” I saw in ‘Buck’ was just a step above. He does have a picture of the behavior he wants the horse to offer and FAR better timing than the old “horse breakers”, but he does shape most of his behaviors using quick jerks on a rope halter or by waving long flags to move the horses off. The horse’s motivation is definitely avoidance. He talks about horses being afraid for their lives and understanding how that feels, but when a buckskin mare he has on a very short lead crashes through him with her shoulder desperately trying to get away from his flag, her head gets jerked around so fast her hind end spins out. In my book, that’s not sympathy to her fear. It’s punishing the shoulder crowding even though the horse is already overfaced. Maybe she’s had enough for the day.  Maybe she needs her training chunked down into smaller lessons. Buck is a lumper, not a splitter. A ‘lumper’  is a trainer who presents training to their animals in big chunks which makes it harder for the animal to understand. They don’t break the behavior into all of it’s component parts so the animal gets a lot of “wrong” answers and the training is very stressful.

There is no reason that a young horse has to go from being untouched to ridden in the same day.

Buck Brannaman stressed, scared, and intimidated most of the horses he worked with. He is a survivor of abuse himself and he probably does believe he is giving horses ‘a better deal” but I think it’s a good thing horses can’t talk. Over and over I saw people at his clinics amazed by how effectively he could flood a horse by restricting it’s movement and causing it to be “calm” because it learned struggling was painful and fruitless. It’s impressive to watch a horse go from bucking, twisting and kicking out to moving forward calmly. But a good trainer never causes the horse to buck or kick out in the first place. Just because you can rope a horse by the  leg and safely immobilize him from a distance doesn’t mean you should. It looks good on film, but if you measured the cortisol level in those horses’ bloodstreams, you’d likely  find it’s the same as Buck’s on the nights his father came after him and his brother Smokie in anger.

There is a 3 year old stallion in the movie, a very confused and dangerous bottle-fed orphan, who shows up at one of Buck’s clinics. Bottle-fed horses often grow up to be aggressive. Without the species-appropriate influence of their mother to teach them about dealing with frustration, inhibiting their teeth/hooves and lack of outlet for appropriate horse play, they grow up to be both very physical and to have a short fuse. It’s a bad combination in a 1000 lb animal. A thoughtful plan for dealing with this horse would have been to call the vet, have him sedated and gelded right there in one of the clinic pens and given him 3 more months for the testosterone to drain out of his system before assessing whether or not it was even safe to work with him. Give the woman her money back in order to pay for the surgery and meet her somewhere else on the road if it seemed viable. Instead, Buck decided to work with the horse. First, he roped the stallion’s back left fetlock (a move that could have caused serious joint injury) and pulled him to a halt from his own horse. He kept the horse busy enough with the pressure on and off his leg for another man to get the horse haltered, saddled and ridden.  It was an incredibly tense and chaotic scene. The flooding did not work on the stallion and he did not come out of the pen quiet or subdued. He WAS  tired and limping. Later on, when the same man goes back alone to lead the stallion and  ‘sack him out’ with some saddle blankets the horse becomes increasingly aroused and ends up snaking his neck out and biting the man in the forehead before he knocks him to the ground and attempts to kneel on him in an effort to kill him. The man lives, but he easily could have been killed.  The owner decides she needs to put the horse down for everyone’s safety, and eventually, he is loaded onto the trailer without anyone else getting hurt, but not before the stallion gets one more bite attempt in toward the injured man’s head.

The next day, when the clinic participants ask Buck to speak about the colt, he talks a lot about the responsibility of raising a youngster and that the colt might  have been fine if he would have had the right upbringing. But he isn’t clear about which behavior issues are caused by the bottle feeding, or what the stallion’s owner could have done differently, or the fact that gelding him 2 years ago might have helped. I am fanatical about clear language. Telling people it is a big responsibility to bring up a youngster does not give them any tools for navigating the  situation more successfully themselves in the future. We have a huge problem in animal training with experienced, intuitive trainers who have not taken the time to learn how to teach verbally the specifics of what they know how to do experientially. If  you don’t take the time to learn the science and terminology behind what you are actually doing moment to moment, the knowledge ends with you. You have to be able to explain it in order to transfer the knowledge to other people. Otherwise, clinics are nothing more than a traveling show. People might be amazed, but not changed. For the welfare of horses to improve, people need to learn why and how, so they can replicate it with their own animals.

People are easily dazzled, especially when they haven’t yet learned enough to see the real tools being employed in training. We aren’t taught much learning theory or ethology in school, so it’s hard to know what we’re looking at. Maybe it’s voodoo that the horse is following Buck around ‘like a puppy’ after five minutes in a round pen or maybe it’s that every time the horse turned away it got ‘sent off’ at a good trot or canter and it quickly learned following Buck was the only way to conserve energy, a necessary resource for an animal that gets eaten when it can’t run anymore. And for the record,  that is negative reinforcement, adding in something uncomfortable or fear inducing that the animal can avoid if it offers the right behavior. There is a choice involved, although its a bit of a rock and a hard place. Be exhausted and afraid, or follow me around. That’s coercion.

It is good that humanity at large is realizing that horses deserve better treatment. The natural horsemanship phenomenon was the first step in moving toward a more humane life for horses. But these men like Buck that are being hailed as magicians and sages are no longer the leading edge of what is happening in the horse training world. We have new technology that allows us to teach horses what we want from them without ever even eliciting high level stress or the flight response. We have science that explains how horses learn so we don’t have to rely on mythology or fairytales anymore. We have empathy that we can extend even further from denouncing punishment and abuse to understanding that riding on a horse’s back is our dream, not theirs. We owe it to them to teach it in such a way that they actively enjoy and collaborate in the process. No ropes. No bucking. No intimidation, flooding or learned helplessness masquerading as calm acceptance.

Positive reinforcement is the new frontier. The horse decides what is reinforcing (carrots, apples, peppermints)  and the responsibility is on trainer to make the lesson interesting and worthwhile and safe for the horse. There is a quote by Henry Beston I have loved since I was a child:

For the animal shall not be measured by man.  In a world older and more complete than ours, they move finished and complete, gifted with the extension of the senses we have lost or never attained, living by voices we shall never hear.  They are not brethren, they are not underlings: they are other nations, caught with ourselves in the net of life and time, fellow prisoners of the splendour and travail of the earth.

We can’t assume to know the exact shape of a horse’s world. But we can teach them in a way that honors our difference. We can approach them as equals and invite them to learn what we have to teach. People talk a lot about horses learning respect but maybe we should look at our end of the lead rope. Your horse is your mirror.