The first time I saw Sistine and Faa, mare #9668 and foal #9669, I had a full three days of students scheduled, lots of chores to finish and a very tight schedule. I was taking a quick coffee break and scrolling through my Facebook feed when I saw a photo of a skeletal mustang mare and her foal in the Kaufman Kill Pen in Texas. Unfortunately, there are lots of starving horses these days. Between the drought out west and the economy still struggling to recover, the issue is on the rise. I wish hungry horses were uncommon, but they aren’t. Normally, I look, but scroll past. But something in this mare’s face, huge against her emaciated frame, had spoken to me. Even starving, she was beautiful. She had a foal at her side, still bright and new, and a quiet resignation in her eyes that humbled me. She was stoic. I saw in her face that she would go to her death without complaint. She was young too, only five, so she would go to her death prematurely, a book that had never even been opened. In her I saw beauty, grace and calm acceptance and I wanted to know how those things would look lit from within. If this was how she looked in utter neglect, left to die, how magnificent would she be fully empowered? She felt like one of our herd and I wanted her to come home.

Within a whirlwind twenty-four hours I purchased the mare and foal or “bailed” them out, called on our local and phenomenal animal community who generously raised enough money to cover their transport from Texas to Wisconsin, and found a local farm in Texas willing both to pick them up from the pen and to provide them with a thirty day quarantine and weight gain program. Mare #9668 and foal #9669 would be coming home to Idle Moon.

Here’s the truth: I don’t know what happened in their lives to cause them to end up where they did, starving, in a kill pen waiting for a truck to Mexico. I only know they were owned by a man who breeds draft horses, who sold them as a pair to another buyer in August. After that, things obviously went downhill. But what I did know was this: I would assume nothing about their past. We would start over, fresh. They needed names. I named the mare Sistine for the Sistine Chapel. Something ancient, something holy, something neglected that was later restored. Something now considered a beautiful work of art.

The foal we named Faa, after the King of the Gypsies from The Golden Compass. He’s bright and golden and will be big enough to pull a gypsy wagon when he reaches maturity.

Once they arrived here, it was clear their new names fit the shape of their souls. Faa is social and brave and follows any human at all in order to solicit scratches. Sistine is quiet and observant and when I get close to her during feeding time, I can feel her disappear deep inside her body. In these observations are our beginnings. When humans adopt a brand new horse, or dog or child, even, it’s natural and healthy for us to have dreams about what the relationship will be like. Those dreams and stories we tell are part of how we commit to the process and they say much more about who we are, full of hope and able to imagine new beginnings, then they do about the animals we bring home, who do not imagine or dream of distant futures. Of course I dream of Sistine, completely healthy, full of muscle and using her body as elegantly and expressively under saddle as the ceiling of the chapel for which she is named was painted. But today she is just a very skinny mustang mare who doesn’t yet know what to expect of me. Today, in small moments, I will begin to shape her perception of me, her perception of herself toward my dream which I hope will become a common dream.

What is most important for her to learn?

1) I am a source of reinforcement
To be interested in me, to be motivated to learn from me, Sistine must perceive me as a source or reinforcement. I feed her numerous times daily, so this is given. Each time I appear with food, I become associated with the positive emotions the food elicits. This also begins to build our social relationship.

2) Sistine can control “bonus” reinforcers through her behavior
Consequences maintain behavior. In order for Sistine to feel motivated to offer behavior, she must feel like she can gain access to reinforcers as a consequence of her behavior, i.e., a handful of grass pellets for walking next to me. 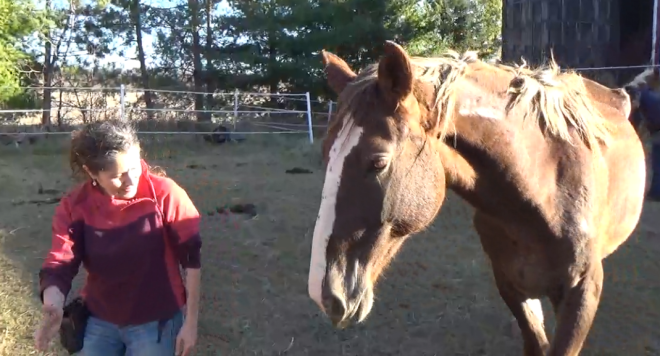 That’s it. Those are the only two concepts that I need to present to Sistine in order for us to start forging our working relationship. The easiest way to begin her “training”, then, is to set up a very simple contingency where she is sure to succeed because the behaviors I am going to be looking to reinforce are behaviors I have already observed in her repertoire in relation to me, ie, she already does them while I’m there. It’s too grand for me to consider teaching her something novel. I want these first sessions to be easy for her, very low stress and to predict a very high rate of reinforcement. What have I observed that she can do reliably? She always follows me at a walk just behind my shoulder when I walk into paddock with food. Here’s a video of our first training session together:

In one sense, I’m not teaching her any new behavior at all. She already knows how to walk forward on her own, and it’s something she does four times a day when I walk into her area to give her her food. But I am teaching her a new consequence when it comes to humans. If you move forward when I do, bring your body into motion, I will reach into my treat pouch and offer you some grass pellets. Your behavior affects your environment.

Right now, there is a lot Sistine needs to learn for her own well-being. She is afraid of being haltered so she can’t be led on a rope out of her paddock, yet. She has a bit of a clubbed foot on her left front leg and will need a few years of remedial hoof care plus shoulder stretches to help balance her out. She could use a good brushing. But those skills will come.  Without taking the time to introduce her to the idea that she can control reinforcers through her behavior, without letting her confirm that expectation day after day, she won’t be as persistent of a learner. She might shut down, or panic. So, first, I draw her out and allow her to feel successful through easy contingencies that she can fulfill. This is the fun, easy part, watching her begin to light up again. We are building the subtle underpainting that will allow everything later to glow.

5 thoughts on “Sistine and Faa”